Encapsulation is the object model concept of including processing or behavior with the object instances defined by the class. Encapsulation allows code and data to be packaged together.

The definition of methods for a class is an integral part of encapsulation. A method is programming code that performs the behavior an object instance can exhibit. Calculating the age of a person would be an example of such behavior. The figure shows a way of looking at encapsulating the age method with an instance object. The code for the age method is "attached" to or encapsulated with the object rather than part of the application. 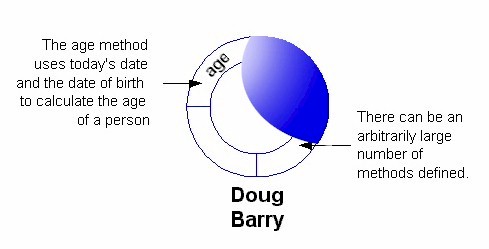 You may use this material for your work or classes. Reprint Policy. Be sure to check the menu at the left for other articles available on this site.

Douglas K Barry is also the author of a book that explains Web Services, service-oriented architecture, and Cloud Computing in an easy-to-understand, non-technical manner.

This is a guide for the savvy manager who wants to capitalize on the wave of change that is occurring with Web Services, service-oriented architecture, and—more recently—Cloud Computing. The changes wrought by these technologies will require both a basic grasp of the technologies and an effective way to deal with how these changes will affect the people who build and use the systems in our organizations. This book covers both issues. Managers at all levels of all organizations must be aware of both the changes that we are now seeing and ways to deal with issues created by those changes.